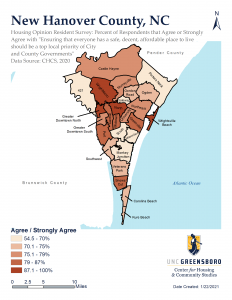 This study was developed by the University of North Carolina Greensboro Center for Housing and Community Studies (CHCS) in response to a request from the Department of Planning and Land Use in New Hanover County. We were charged with gathering community input about their perceptions and opinions on workforce and affordable housing. As part of this process we attempted to find and measure the gaps between the housing needs of workers and low-income residents and the resources available to meet those needs. We sought information, perspectives, and insights from advocates, activists, developers, realtors, researchers, lawyers, and housing service providers, through 24 key informant interview, five focus groups with 35 total participants, and a community survey with 1,463 responses. Additional contextual data was obtained from secondary data sources including the American Community Survey, Simmons Analytics, the National Center for Education Statistics, the Centers for Disease Control and Prevention, etc. Where appropriate, we have used summary tables, figures, maps, and other data visualizations. Interwoven throughout the report are rich quotes compiled for qualitive analysis of write-in responses on surveys, and from transcriptions of interviews and focus groups.

New Hanover County and the City of Wilmington have experienced a rapid increase in population. As one key informant explained, “We’re one of the fastest growing communities in the nation or in the state and have been for 30 years.” Census data show the population increased 31.36% since 2000. Focus group and key informants all said that the areas is known as a “highly desirable” place to live, with an “exceptional urban core with a wide range of different amenities,” and a “high quality of life.” Participants in the study attribute the part of this growth to retirees from other parts of the country as well as “a pretty significant uptick in young professionals and young families” especially for technology and professional positions.

As a result of this desirability and good quality of life, there has been an influx of families moving from other places. The resulting increase in cost of living has led to a severe shortage of affordable units at all price points and affects population groups at all levels of the socio-economic scale as evidenced by respondents to the survey, where nearly two-thirds (63.6%) reported that they worry about spending too much of their income on housing costs (including rent/mortgage, utilities, home insurance, etc.). With land values increasing rapidly and in short supply, there is a squeeze on producing affordable options. And while a quarter of survey respondents (23%) would like to move out of their current homes, they say they have no better option in their price range.